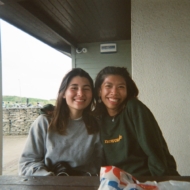 It’s great to see that the portrayal of characters with mixed cultural heritage has become more prominent within film and TV in recent years, providing a better representation of typical audiences.

My own ethnic background of Japanese and Caucasian is portrayed in Disney’s Big Hero 6 (2014). This film is an adaptation of the Big Hero 6 comic books created by Man of Action and published by Marvel.

The film presents a half Japanese and half American 14-year-old protagonist named Hiro Hamada, who has a Japanese father and a Caucasian mother. The film is set in an imagined world called San Fransokyo – a combination of San Francisco and Tokyo.

As an animation student, I’m very interested in visual
development, especially for feature animation, and studying how artists use design to visually communicate the imagined world and the personality of a character through their physical appearance and their relationship with their environment.

In preparation for designing the characters and the world
they live in, the artists would need to conduct plenty of research. The artists make plenty of different design iterations; ideas arise from experimentation and exploration of designs, and these may spark other ideas until the artists find something that works and evokes the emotion that they want to convey.

For the buildings in the environment of San Fransokyo, the artists used real life buildings as a foundation upon which they would make adjustments in the designs. This maintains a sense of familiarity for the audience whilst also allowing the artists to simplify the designs to create a certain aesthetic that would better fit the narrative. The following image presents an example of this from a page from the Art of Big Hero 6 book.

It is important to consider the backstory of environments
and characters in the process of visual development. Scott Watanabe, the art director for environments for Big Hero 6, stated: “Don wanted to figure out a logical explanation for how a mash-up city like this could exist. I came up with the idea that, after the 1906 earthquake in San Francisco, Japanese immigrants rebuilt the place using techniques that allow movement and flexibility in a seismic event.”

Shiyoon Kim was assigned as the film’s character designer. Similar to when designing the environment, there needs to be a set backstory, a list of personality traits and a collection of references before the design process for the character can begin.

Kim explains: “I thought about what that fourteen-year-old would wear, what he’d think is cool. A genius kid like Hiro would be eating cup-o-noodles and playing a videogame while also doing his homework. He’d be wearing basket-ball shorts and have really messy hair. And I wanted his teeth to be kind of crooked, like they’re still half-formed.”

The character of Hiro is very focused on his work and his appearance is not a priority, and so the artists designed his hair and clothes to be dishevelled. His personality is also communicated through subtleties in his movement; his messy nature is conveyed through his loose-fitting clothes that create overlapped action.

The characters of Hiro and his brother Tadashi Hamada are not bound to one culture; their designs are a result of a culmination of two very different cultures. The story does not focus much on their ethnicity – they are just people existing in this imagined world. The designers were able to avoid stereotypical designs of one ethnicity as they could incorporate different cultures into one character. The artists successfully portrayed characters that embody both cultures equally.